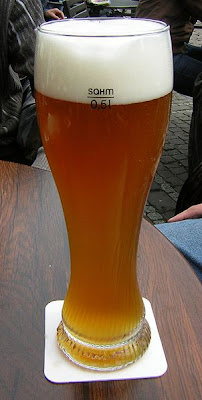 weissbier. This beer is unique in Germany a lager brewing nation, in the fact that it is an ale, and that it is brewed with up to 70% malted wheat. "Hefe" means yeast in German and "weizen" means wheat. Being an ale, hefeweizen is brewed with a distinctive top fermenting yeast strain that gives this beer style its character. These beers are unfiltered, and most are bottle conditioned and sedimented with yeast giving the beer a very cloudy appearance.

Most examples of hefeweizen are brewed with paler malts and malted wheat, and because of this, they are also know as weissbier or "white beer". Hefeweizens are tart and thirst quenching beers with estery fruitness, with a firm malt palate. The signature aroma and flavor profile found in hefeweizens come from the yeast used in the brewing of this beer, and it is unmistakable in this beer.

Aromas and flavors of clove, banana, bubble gum, apple, pear, are all produced from the use of this unique yeast. Hefeweizens are very lightly hopped so have little hop aroma or bitterness. Hefeweizen should be poured smoothly into a tilted, rinsed glass. Stop pouring when there is about a quarter of the bottle left, swirl the bottle to rouse the sediment, then pour the rest into the glass to give a big, fragrant head and release the yeast into the beer to give it its cloudy appearance. The glass should be like the one pictured here, it is called a weissbier glass, designed specifically for hefeweizen.

The addition of a slice of lemon to a hefeweizen is something that you will for the most part not seen in Germany, and it is believed to have been a marketing gimmick more than anything else. I drank lots of hefeweizen in Bavaria, and there was not a lemon to be found. I would suggest if you are going to drink an authentic South Bavarian hefeweizen, do so without a garnash of lemon.

These beers are actually "morning" beers in Bavaria and are often paired as a late morning beer with steamed weisswurst sausages and pretzels. They are very popular in the summer months, and are a very flavorful, very drinkable beer style.
Posted by Red Rooster at 12:27 PM