To the Moon or Bust? : Moonshot '69 Premium Beer with Caffeine 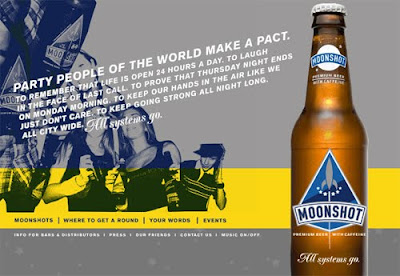 When I get up every morning, I need to have a cup of coffee to get me going. I might have another in the day to keep me going. Then I might have a soda, or if I really need a jolt a Red Bull or a Rock Star. What do all these drinks have in common? The obvious, they all have caffeine in them. So why not have a beer with caffeine?

Rhonda Kallman the founder of the New Century Brewing Company, of Hingham, MA is trying to answer that question. Kallman is no stranger to the beer business. She helped establish a little Boston based brewery 25 years ago called The Boston Beer Company. They brew a beer called Samuel Adams, and I don't think I need to go any further. Kallman is a proven success in the beer world. She left BBC to strike out on her own in 1999. Her first solo venture into the beer world was in 2001 with a light beer called Edison Light which has enjoyed some moderate success is some markets. Light beer at one time was a new beer, and a trend, and is now the most popular beer style in the United States.
Kallman is banking on a beer with caffeine to be the next big thing in the beer world. The story goes the idea came to her when she was dancing at a concert, was drinking beer, but switched up to a caffeine drink for a boost. It dawned on her why did she have to switch ? What the beer world was lacking is a beer with caffeine. Moonshot is a "light bodied" pilsner by style with powdered caffeine added. Kallan also saw the success of Starbucks coffee and Red Bull, and it all came back to one thing, caffeine. Why would this not work with beer?
Trends come and go, but can a caffeinated beer stand the test of time, or just being a passing fancy? The jury is still out on this one. New Century is a contract brewery and this beer is currently being produced at the FX Matt Brewing Company, of Utica, NY. It is currently only available in New York City, and Boston, but Kallman's goal is the keep the brand growing and reach more markets. I recently watch the documentary film Beer Wars which features Kallman and her struggle to get the finances to take Moonshot to the next level.
I'm a bit skeptical about this one. I have enjoyed beers with coffee in them, such as stouts and porters, but I'm not sure I necessarily want a beer with caffeine. Especially so when I hear Kallman stating things like a beer that is "refreshing" and one for when you want a "boost". I don't hear her mention flavor, and for me I want flavor even in a "light bodied" pilsner. At best I see this being a niche beer in a niche segment of the craft beer market. Kallman seems to be going after the bar/club scene with this beer, and I believe she might indeed find some success there. I just don't see the average main stream beer drinker, or even the craft beer drinker reaching for this one too often. I would be willing to give it a try, and who knows. Good luck Rhonda. You did a great job with Samuel Adams, lets see if Moonshot can take you into the stratosphere. For more information visit the brewery's site at: http://www.moonshotbeer.com/
Posted by Red Rooster at 2:58 PM