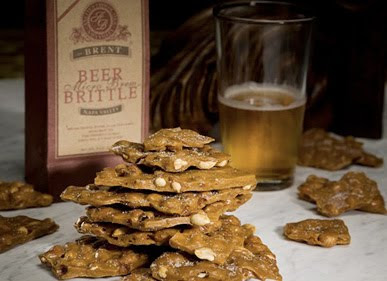 Eat your beer. Sound crazy to you? It is actually more common than you think. Beer is used as an ingredient in many a dish from soups to deserts. The Belgians are so in love with beer that cuisine à la bière (cooking with beer) is a recognized style of cooking in Belgium and parts of France.
Beer as an ingredient in a salty/sweet combination makes for a very tasty snack for a beer lover. One combination I came across a few years ago is beer brittle. Take a really good peanut brittle, add a really good beer, and you have a bitter sweet symphony of flavors.

My particular favorite is Brent's Micro Brew Beer Brittle which is one of the many delicious products created at Annette's Chocolates of Napa Valley, CA. What makes this beer brittle stand out? You really can taste the beer in this brittle. Annette's is using an amber ale, and you really get some good hop bitterness in this brittle. When cooking with beer, hop bitterness becomes more intense, so you don't want to make this with a beer that is too hoppy. Combined with the salty flavors of Spanish peanuts, and the sweetness of the toffee, this stuff is to die for. I understand they even have a fiery version made with chili peppers bringing this brittle to another level. In any event, if you are looking for a great gift for a beer lover that is a little different? Beer brittle is a good idea. Trust me on this one, it won't last long. For more information about getting your hands on some of this stuff, visit Annette's website at: www.anettes.com/
There is also a company out of Hattiesburg, MS called The Munchy Monkey that makes a Cajun Beer Brittle that looks like it is worth investigating. I am yet to try that one, but will be ordering some and see how it fairs against the Brent's. For more information about getting your hands on the Munchy Monkey's beer brittle, visit their site at:
www.themunchymonkey.com/
Posted by Red Rooster at 1:32 PM