Beer Sommelier or Beer Douche? Round 2: Women get into the act 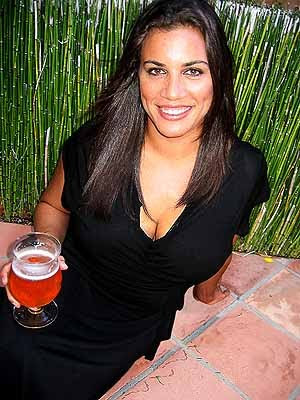 Can you believe this gal? Is this deja vu or what? She calls herself the Beer Chick and that her occupation is a Beer Sommelier. According to her beer blog, she was recently named "Best Beer Sommelier" in Los Angles Magazine's "Best of" issue. Impressive. Or maybe not. I'm going to go out on a limb here, but I think the number of "beer sommeliers" found in city of Los Angles could probably be counted on your finger tips. Odds are being "the best sommelier" in LA is probably a dubious title at best.

Ladies do not get a pass on this. She might be a lot easier on the eyes than her male counterpart but the truth of the matter? All this women has done is high jack the title of a trained and certified wine steward and made it meaningless by putting "beer" in front of it. When you have to be trained, tested and certified? You have earned a title. Managing a beer bar, co-authored a book about beer, and consulting (anyone can call themselves a consultant) about beer are all well and good. It makes you a very informed beer geek, not a sommelier.

Like her male counterpart, she has parlayed her love affair with beer into a business. I wish her the best of luck, but she really is selling her clients or would be clients a false bill of goods. Restaurateurs hire real sommeliers for a reason. They know at the very least, they hired a person with some sort of formal training, that was tested, and to claim the title, should be certified. I guess if they want to do it on the cheap, they hire a "beer sommelier" and I'm sure they pay accordingly. Real sommeliers don't come cheap, and that is the crux of the argument for me. If anyone can just claim a title because they feel they are good at it too, so therefore that makes them so? Not good enough I'm afraid. It makes a title earned pretty pointless and meaningless in my opinion. You would hope the pilot who is flying your plane and calls himself a pilot actually went to flight school. Call me crazy, but that is just me I guess.

I do not doubt this lady's love and passion for beer. I don't doubt when she managed a beer bar she learned a lot about beer, and how to serve it. I have read her stuff and I like what she has to say. I like the fact that she is educating and introducing women to the wonders of beer. I get it, she is a chick yet she likes and knows good beer just like a guy beer geek. That might have been novel 10 years ago, but frankly that shtick is tiresome. You are a little late to the party miss. I knew gals drinking great beers 15 years ago. There are more chicks out there today drinking more good beer than you think. You should give them a little more credit.

I think this young lady would probably make a great cicerone someday. I would suggest to her what I suggested to the other "beer sommlier". Put away the phony beer credentials and made up titles, and become a real cicerone, the beer world's answer to a sommelier. As I stated last time around, sign up for the Cicerone Certification Program. Being certified from an independent body that appears to be doing this certification to better serve to food/beverage business would be more credible than a silly, self proclaimed title.

Sorry but like the other "beer sommelier"? This gal? Beer douche.
Posted by Red Rooster at 3:54 PM