The best food to eat while you are drinking beer? 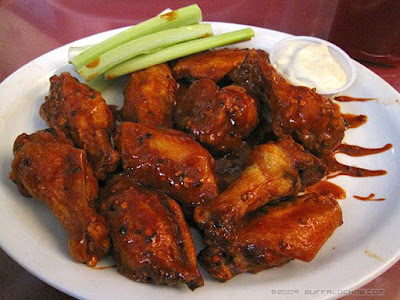 This very issue has been debated for decades. I know there are foods I crave after a long night of drinking beer, but what food do I like while I am drinking beer? Fried pickles have become a rising star, but they can be hard to find on a lot of menus. Is it possible that anything goes better with beer than Buffalo wings? I get pizza, fries, and all that, but you want to drink a lot of beer, and have something to keep up with the drinking? Buffalo wings is it for me. I tend to go with the super hot wings and always go with blue cheese and celery vs ranch dressing. Not a big fan of "dipping" either. I eat the wing, then dip the celery stick in the blue cheese to cool the burn. Anal retentive on following the proper Buffalo wing protocol.
Posted by Red Rooster at 8:13 PM