Made on Honor. Sold on Merit: Great news for Narragansett Brewing 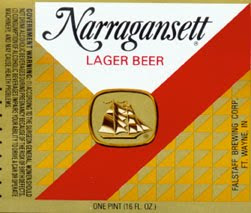 Now here is some news that made me very happy. The Narragansett Brewing Company of Providence, RI is doing very well, and if things keep going the way they are? The Ocean State will see Narragansett being brewed once again in Rhode Island for the first time since 1983.

Reports have been strong on a state-by-state basis throughout the region for 2009. In Massachusetts, Narragansett sales grew by 90%, and for the first time in a generation the brand cracked the Beer Distributors of Massachusetts Top 20 Brewers ranking. In Rhode Island, Narragansett established an impressive 2% overall market share across the state, and in Connecticut, sales have more than doubled over the past year. Founded in 1890, the famous Narragansett Beer is celebrating its 120th year of proudly serving New Englanders, a heritage enjoyed by none other. Under the leadership of former Nantucket Nectars President, Mark Hellendrung, ‘Gansett is working to revive and reestablish the beloved local favorite.

Following Hellendrung’s purchase of the brand from Pabst Brewing Co. in 2005, and the reintroduction of ‘Gansett’s original recipe immediately thereafter, the company has focused on bolstering its presence in package stores, bars, and restaurants throughout the region. In an industry dominated by global brands, Narragansett has found success through grass roots marketing, strategic partnerships, and local relationships as well as sampling and promotional events. In 2009 alone, ‘Gansett executed close to 1,200 such events.

Narragansett is currently available in 1,036 bars (and counting!) throughout New England’s neighborhoods, including such venues as Fenway Park and Gillette Stadium. In 2010, the company has set their sights on significant expansion of on-premise business in Massachusetts, Rhode Island, Connecticut and New Hampshire. In the last three months alone, Narragansett added over 150 new accounts in Massachusetts and 60 in Rhode Island.

Heading into Spring 2010, Narragansett is poised to hit the milestone of 1 million cases sold since the re-acquisition. This exciting benchmark for the company represents a major step forward in the Narragansett “Build a Brewery
Posted by Red Rooster at 2:34 PM